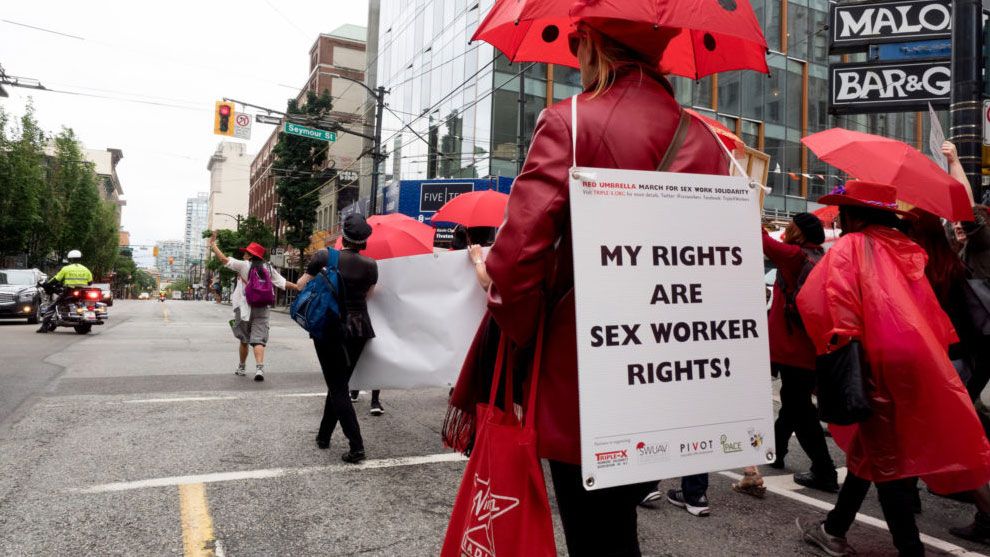 Sex workers and their clients are complicated. They’re people, and people have rights. The Nordic Model does not affirm those rights, and it can’t and won’t guarantee the dignity and safety of sex workers. (Sally T. Buck / Creative Commons)

This blog post was originally published in Ms. Magazine.

Governments around the world are increasingly adopting strategies meant to decrease sex work by criminalizing those who purchase sex, inspired by a 1999 Swedish law that first penalized the purchase of sex rather than its provision. Many now view the “Nordic Model” as best practice for minimizing the negative consequences of the sex trade, particularly trafficking for the purposes of sex; strategies that follow its example attempt to put an end to the demand for sex work, theoretically disincentivizing sex work as a source of income.

Sex workers and their clients are complicated. (Of course they are: They’re people.) The parameters and effects of interactions between sex workers and clients differ across geographic, social and political contexts—and their individual lives, independent of each other, are complex and varying in their own right, too. The Nordic Model falls short because it applies an oversimplified macro-economic framing of supply and demand to an industry that consists of fundamentally discrete, personal and often isolated or irregular interactions.

December 17 is the International Day to End Violence Against Sex Workers—and we’re demanding an end to “End Demand.” Here are three reasons why.

Proponents of the Nordic Model view all sex work as exploitation to which sex workers cannot consent. Sex workers’ rights organizations, coalitions and activists who advocate and organize for the decriminalization of sex work are irrefutable proof that this interpretation is false.

The Joint United Nations Programme on AIDS (UNAIDS) defines a sex worker as a person 18 years or older who receives money or goods in exchange for sexual services, either regularly or occasionally. The understanding that sex workers provide services, rather than commodify themselves, is an important distinction between advocates for decriminalization and those who support criminalization.

Voluntarily providing a service to a client in any field does not indicate subservience to the client, nor confer ownership to them; generating income from the provision of services to others does not detract from a provider’s personhood. To assume that sex work does is to view the bodies of sex workers as commodities whose ownership can be and is transferred to their clients—and to then criminalize sex work on this premise enshrines the dehumanization of sex workers in law and policy.

In 2013, UN Women affirmed the problems with conflating sex work with sex trafficking, stating that it “leads to inappropriate responses that fail to assist sex workers and victims of trafficking in realizing their rights” and that failing to distinguish between these groups not only infringes on sex workers’ health rights, but can also impede efforts to prevent and prosecute trafficking.

It’s true that exploitation and trafficking for the purposes of sex do occur in the sex industry, and they must be addressed. But denying sex workers their rights does not affirm those of trafficked persons, and enacting harsher criminal laws against sex work, and attaching morality-driven conditions to U.S. foreign assistance, has not been proven to be effective.

While supporters of the Nordic Model claim the policy only criminalizes clients, its enforcement still results in police targeting sex workers—and an increase in their vulnerability to homelessness, violence and trafficking. Criminalizing the demand side of sex work instills a fear of being caught among clients, pushing sex work further underground.

One woman reflected that the Nordic Model left sex workers in Norway with a “weaker bargaining position and more safety concerns now than before the law was introduced.” Following the Nordic Model’s implementation there, sex workers were evicted and discriminated against by their landlords in Oslo, faced increasing harassment from police assaults by clients and could no longer as easily negotiate safe sex practices or access health care services.  Many of these human rights abuses resulted from increased police surveillance of independent sex workers; according to a lawyer interviewed by Amnesty International, “the police use all of their efforts to take down the women, as it’s the easiest way to get rid of the problem.”

#3: These policies create and sustain barriers to essential health services for sex workers.

When their work is criminalized, sex workers are also further marginalized and deprived of legal and health services. The Nordic Model reinforces each of the structural drivers of sex workers’ diverse and significant unmet sexual and reproductive health rights and needs: criminalization, stigma, discrimination and endemic violence.

The global response to the health of sex workers has focused largely on their disproportionate burden of HIV, but this health outcome occurs alongside additional unmet sexual and reproductive health and rights needs. Many sex workers face an unmet need for family planning, frequently resulting in unintended pregnancy. High rates of unintended pregnancy can lead female sex workers to resort to unsafe abortion, especially in countries where abortion is restricted or otherwise inaccessible; although some female sex workers are and want to become mothers, integration between HIV and antenatal services for sex workers remains underdeveloped. Around the world, violence directed at sex workers by the state, clients and intimate partners is also a severe problem that negatively affects their health and rights in numerous ways.

You can read the Center for Health and Gender Equity’s fact sheet to learn more about the sexual and reproductive health needs and rights of female sex workers.

The Nordic Model is a legislative wolf in sheep’s clothing. Instead of protecting the health and rights of sex workers, it embodies an elementary, paternalistic understanding of sex work and of sex workers as human beings—undermining the agency and bodily autonomy of sex workers with a victimization framework.

Solutions to empower people who are marginalized should be formed in consultation with, and with deference to, the members of those communities. Decriminalization policies, which remove all criminal penalties for sex work, are the only sex work regulation approach that enables governments to provide needed health services to sex workers and equitably affirm their rights. Human rights standards, public health evidence, principles of harm reduction and emergent legal norms all call for decriminalization—and sex workers do, too.

Research shows that sex workers can be be critical partners in preventing and countering trafficking; decriminalization not only increases their own safety by enabling sex workers to report violence to the police, but would also empower them to report sex trafficking. Decriminalization can also improve access to HIV and sexual health services for sex workers—and, when supported by community empowerment initiatives, can avert 33 to 46 percent of HIV incidence among female sex workers in just 10 years.

Sex workers and their clients are complicated. They’re people, and people have rights. The Nordic Model does not affirm those rights, and it can’t and won’t guarantee the dignity and safety of sex workers.

It’s time for women’s and human rights advocates to call for policies that do.

Zoë Bulls is an Advocacy and Partnerships Associate at the Center for Health and Gender Equity.

Victoria Watson is a Research Analyst and Global Health Corps Fellow at the Center for Health and Gender Equity.